Book Report: Cujo: The Untold Story of My Life On and Off the Ice

I love to read. I mostly read about history and am on a kick of reading presidential memoirs and biographies, but every so often I break up the seriousness of history with books about sports. After finishing a biography about James Munroe I picked up Cujo: The Untold Story of My Life On and Off the Ice.

When I sat down with this book I was worried it would take me a long time to read it as I am admittedly a slow ready. That’s ok though as studies show slow readers have greater retention of what they’ve read. Maybe that’s why my wife says I’m the ultimate Trivial Pursuit partner – my mind is full of useless knowledge.

Anyway, this book did not take me a long time to read. In fact is was a quick read, taking me a little over a week. One thing I appreciated about its structure was that it was broken into a lot (74) chapters that were usually 3-7 pages long instead of fewer chapters of 20+ pages. I don’t like to stop reading mid-chapter so if I don’t think I can finish a chapter I won’t start reading.

So what about the content of the book? Well, let me start by saying that when Curtis Joseph was with St. Louis in the ’90s I was a huge Blackhawks and Eddie Belfour fan so Joseph was naturally public enemy number one. I did not like him. I thought he was a terrible goalie playing on a garbage team. When he moved onto Edmonton I started to appreciate his style of play, a style that one could argue can be seen in the way I play. 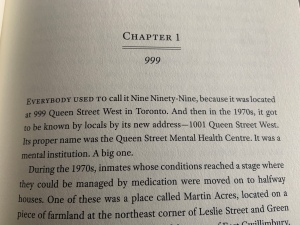 He continued to bounce around, to more teams I didn’t like as he wore the Maple Leafs and Red Wings sweaters. Yea – he rounded out the top three teams I didn’t like as a kid, so how could I like him? Well, the first paragraph of the book changed every thought I had about the man behind the mask. The story of Joseph’s childhood is both heartbreaking as a parent, but inspiring that he found the good in it and persevered despite every opportunity to fall into the pitfalls of childhood almost void of love and guidance.

One thing I love about reading sports books is hearing a player’s backstory on different situations, what was happening behind the scenes, what they were thinking, etc. This book has plenty of such stories. Some may argue Joseph could have gone deeper on some stories or added detail to some of the lockerroom stories, but at some point, you have to edit things out to cut down on how long the book is otherwise you have another War and Peace on your hands.

I thoroughly enjoyed this book and was sad to finish it because I wanted more stories. I wanted to know more about his transition to his post-playing career, but as I stated above, you only have so much space. Maybe I’ll one day get him on the podcast I’m working on, and I can ask him about that transition.

If you’ve read this book, or go onto reading it and enjoy it, another one you will probably like is Ken Dryden’s The Game. That book is packed with stories of Montreal Canadiens of the ’70s.

This site uses Akismet to reduce spam. Learn how your comment data is processed.